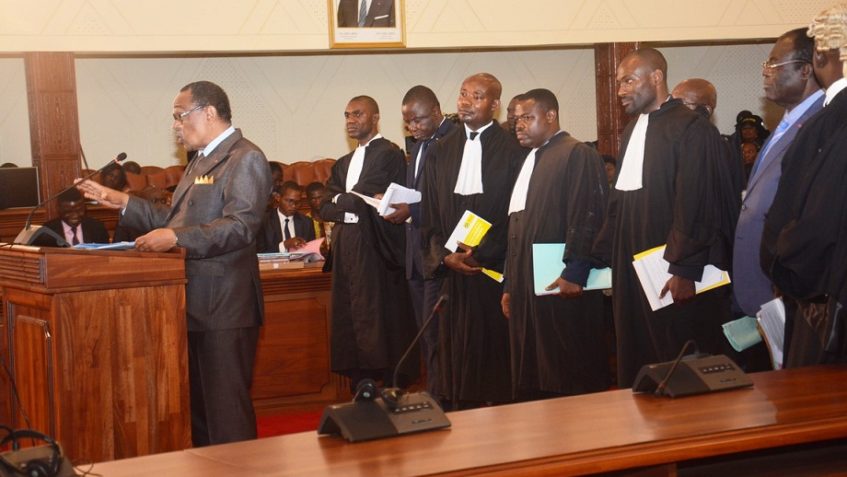 The candidate of the Cameroon People’s Democratic Movement Paul Biya was declared winner on Monday October 22, 2018.

Constitutional Council’s President Clément Atangana in a loud and clear voice declared, “the winner is candidate Biya Paul of the CPDM,” at the 1500 hall of the Yaoundé Conference Centre transformed into a court room. Militants, sympathizers and supporters of the President elect Paul Biya elated, rose up to their feet, clapped, hugged, kissed and shook hands with each other. “Congratulations” was the most popular word leeking from every lip. The Head of the North West Campaign Commission Philemon Yang, where the rate of participation was the lowest in the country, 5.36 %, because of the insecurity shook hands with the President of the National Supervision Campaign Commission for the candidate of the CPDM Jean Nkuété. When the shouts of victory ceased, the President of the Constitutional Council, declared the “election is over”.

It took four hours to read out the October 7 presidential election results. Jean- Baptiste Baskouda, member of the Constitutional Council read out those of five regions and his colleague went through Ahmadou Tidjani, the next five in alphabetical order. Figures of registered voters, cast votes, null and void ballot papers and percentage participation were revealed division by division. Then, the votes in favour of each candidate were read, beginning with candidate “Biya Paul”, in alphabetical order and ending with Osih Joshua. The Constitutional Council followed the same order in reading out the Diaspora vote, country by country, grouped into four zones; Africa, Americas Europe and Asia. Then, the President of the Constitutional Council read out the general statistics region by region, country by country, giving the votes in favour of each candidate. Clément Atangana, moved to votes in favour of each candidate in absolute and real terms, beginning with Paul Biya, the winner.

The candidate of the CPDM, Paul Biya won with 71.28 %, with the second, Kamto Maurice crawling with 14.23%. A hard earned victory especially in the two restive Anglophone regions. “We waded the storm together and came out successful together because of the conjugation of all efforts. In fact, one vote from the North West Region is the equivalent of one hundred votes in other regions,” Prof. Mutia Regina, a militant of Mezam II (Santa) section said. One candidate Ndifor Afanwi Frankline, ministers, diplomats, representatives of international organizations, religious authorities and the population attended the event.